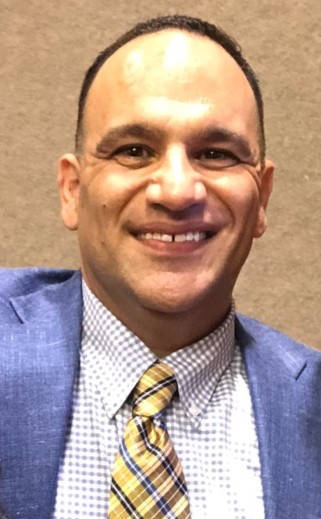 Joseph Dominick was born in Sumter, SC in 1974, to a German mother and ItalianAmerican father. His father was career military and met his mother while stationed in, what was then, West Germany. At the age of 5, Joseph moved with his family from Germany to his father’s hometown of Hammond, LA, when the Airforce stationed his father back to the United States.

Being bi-lingual and accustomed to classrooms overseas, the elementary years of attending a local Catholic school were an interesting cultural adjustment for Joseph. A room full of 1st graders found humor in the boy that inadvertently replied in German to an English-speaking teacher’s question!

In the mid 1990’s, Joseph attended Southeastern Louisiana University, where he received his Bachelor of Arts degree in Criminal Justice. This was not absent frequent attempts by his father to persuade him to attend Louisiana State University. Dad was partial to LSU, being that Joseph’s older brother had graduated from there; or maybe it was being a fan of Tiger Football, or maybe both!

While dad rooted for the Tigers, Joseph found that attending Southeastern would prove to be a great experience in education along with being cultured to the diversity of the local region he would soon be working in. During the pursuit of his undergraduate degree, Joseph began his work with kids. In 1996, he started as an entry level officer with the Florida Parishes Juvenile Justice District’s juvenile detention center. Four short years later, Joseph had worked his way through the ranks and was promoted to the position of Captain. At the age of 26, he was one of the youngest corrections shift supervisors in the state.

In 2005, the Justice District aligned itself with the national trend of improving conditions in juvenile justice and detention practices, through evidence-based programming. Joseph and key staff effected a culture change that encompassed a completely different way of working with detained youth and, ultimately, set forth the evolution of the agency from an institutional to therapeutic model. Not long after this transition, Joseph was promoted to Director of Female Services, where he managed programming relative to the agency’s female juvenile population. This included the development and managing of the very first long-term placement program for serious and/or habitual offender girls, contracted with the state through Louisiana’s Department of Public Safety and Corrections, Youth Services, Office of Juvenile Justice (DPSC/YS/OJJ).

Joseph later assumed the duties of Facility Manger, where he developed and supervised all of the capital projects for the District. This included two expansions of the detention facility and various large-scale improvements to its physical plant and infrastructure. This role also had him functioning as the agency’s safety officer, where he became well-versed in the responsibilities of disaster and emergency management.

In March of 2016, Joseph was appointed to his current position of Executive Director for the Florida Parishes Juvenile Justice District, becoming the first employee to transition through every rank of the agency. In addition to having responsibility over all of the District’s operations, he remains engaged with the many city and district courts throughout the region, as well as various law enforcement agencies, juvenile justice practitioners and stakeholders statewide and nationally

Joseph now holds a Master of Public Administration degree from Louisiana State University. His father is smiling down; “Geaux Tigers”! He is a graduate of the 12-week Dale Carnegie course for Effective Communications and Human Relations and has received its Highest Award for Achievement. As a public speaker, Joseph shares his passion for working with kids, the public, and effecting organizational change. He currently serves as President of the Louisiana Juvenile Detention Association, is a member of the Performance Based Standards Learning Institute’s Board of Directors and is also a member of the Council of Juvenile Correctional Administrators, where he regularly convenes on a national level with state department heads, to study, discuss, and develop initiatives and best-practices within juvenile justice.

Joseph resides in Hammond, LA with his two children and remains active in his community as member of the Hammond-Ponchatoula Sunrisers Rotary Club. Living in the “Sportsman’s Paradise”, he enjoys hunting and fishing, and is continuously seeking the next physical or athletic challenge.

The Florida Parishes Juvenile Justice District is a political subdivision of the State of Louisiana, having territorial jurisdiction throughout five parishes of more than 3700 square miles and operating the largest regional juvenile detention center in the state; providing juvenile justice services to a population of more than 500,000 citizens.