On Friday, November 12th, Florida Parishes Juvenile Detention Center (FPJDC) held an awards ceremony honoring their post-adjudicated youth and recognizing their completion of the fall 2021 training programs. Joseph Dominick, the Executive Director of the Florida Parishes Juvenile Detention Center, began the event by welcoming guests and juvenile justice stakeholders from the 21st and 22nd Judicial Districts. Mr. Dominick shared a brief history of FPJDC, reflecting on when the center opened its doors in 1994. “FPJDC has primarily been a place of pre-trial detention for youth requiring secure placement. In late 2018, we recognized the need to provide long-term placement space for youth, as many kids were awaiting state placement. With that in mind, I knew we needed something to keep our kids closer to home once they were adjudicated and received their sentence. The research shows that when families remain engaged in a child’s rehabilitation, the outcomes are more successful,” Mr. Dominick stated.

Continuously improving and providing a better way to facilitate family involvement is always at the forefront of our work, and having a facility close to home versus out of state could help provide a different future outcome for students. The Florida Parishes Juvenile Justice Commission and Mr. Dominick worked to develop a long-term, or post-adjudicated program, that could house youth who had been adjudicated delinquent. The center’s long-term program has housed fifty-two youth in the short time of its operation, and thirty-three of these youth received their high school diploma while working the program. As students became more successful at completing such a tremendous feat, FPJDC wanted to push students further to help them obtain a higher education degree and skills training while in the program.

As a partnership with Northshore Technical Community College developed, the opportunity for our students to receive certifications and skills training that would help build their career choices would now be available. Dr. Wainwright, Chancellor of Northshore Technical College, expressed that “Education plays a vital role in rehabilitation. Northshore Technical Community College is honored to work closely with judges, community leaders, and the Florida Parishes Juvenile Detention Center administration and faculty to aid in the development and transformation of our youth through the power of education. This collaboration will ensure the long-term strength of families and communities.” 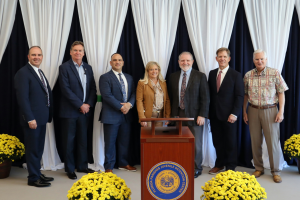 The Florida Parishes Juvenile Justice Commission is an eight-member board appointed by the judges and district attorneys from within the parishes of Livingston, St. Helena, St. Tammany, Tangipahoa, and Washington. The Commission oversees the affairs of the Florida Parishes Juvenile Justice District, its Executive Director, and the operation of the Florida Parishes Juvenile Detention Center. The facility has one hundred thirty-three beds, is opened 24 hours a day / 7 days a week, and houses youth from 10-17 years old accused of committing misdemeanor or felony grade offenses. The Detention Center staffs approximately 100 employees, containing jobs in Detention Security, Counseling, Nursing, Maintenance, and Food Services, with most of the positions involving around-the-clock shift work.

Cheers and applause filled the room when Joseph Dominick, Executive Director of Florida Parishes Juvenile Detention Center (FPJDC), made an uplifting announcement to his staff. Dominick surprised everyone by announcing that the facility had been named the recipient of the 2020 Barbara Allen-Hagen Award, a nationally recognized award signifying excellence in juvenile detention programming. The award was issued to the FPJDC by Performance-based Standards (PbS), a non-profit organization whose membership assist in juvenile justice research, best practices and extensive field experience, while participating a data-driven continuous improvement process customized for youth facilities, residential programs and reentry services. As the PbS website denotes, “The PbS Barbara Allen-Hagen Award was established in 2007 to honor Barbara Allen-Hagen and her retirement from the Office of Juvenile Justice and Delinquency Prevention (OJJDP). Her dedication to improving the quality of life in facilities for young offenders has helped drive PbS to its current success. The award is given annually to one correction, detention/assessment and community residential program that best exemplifies PbS’ commitment to treating all youths in custody as one of our own and used the PbS improvement model to achieve positive outcomes for youths, staff and families.”

Dominick received the phone call from PbS’ Executive Director, Kim Godfrey, informing him of the win late last week. “Congratulations again on winning the 2020 PbS Barbara Allen-Hagen Award. Amidst this challenging, uncertain time, you and your team continued to serve the youths at Florida Parishes Juvenile Detention Center, keep everyone safe and reduce the use of restraints. It is inspiring to work with you and your team. Your dedication, compassion and positive outlook assures us all we will be well”, wrote Godfrey in an email to Dominick that followed her congratulatory phone call.

Months earlier, staff from several of the Detention Center’s various departments met to make long-term plans for working with the youth. “What would we do if this was our own kid?” was the driving question from Executive Director Dominick. He continued, “PbS is a sophisticated set of standards and tools, but at its core, it is about treating incarcerated kids just as we would our own children. We use this as a driving-factor in how we engage with the youth and make decisions about our services. We want to see our residents held accountable for their actions; however, we also want to see them re-enter society as healthy and productive citizens.”

The Detention Center first began participation in PbS in 2009. Throughout the years to follow, the Center’s leadership implemented a therapeutic model based on Cognitive Behavior Therapy that has consistently demonstrated a safer model of care and more effective means of changing criminal thinking, compared to punitive and punishment-based modes. This model contains methods from teaching youth over 180 specific social skills to replacing traditional physical restraint methods with less-invasive systems. Simultaneously, the Detention Center also began adopting a plethora of proactive measures ensuring the detention atmosphere remains therapeutic. Additional training on use of mediation and importance of developing healthy and positive staff-to-youth relationships were added to the Center’s recurring training program, and the results observed were overwhelmingly positive.

Critics of progressive detention models are often surprised to hear of success stories like those celebrated by the FPJDC, due to a misguided belief that therapeutic programming is faulty. Dominick explained, “The proof that our detention model works is in the data. We collect data from 60 unique measures of detention programming, and then compare this data to detention centers across the nation. We know where we excel and where we will focus on improving even more. Our goal is always continuous improvement; to increase the quality of the programming impacting the youth of our District. When the kids know their surroundings are safe and structured, they are more open to positive influence and our opportunity to change their behavior increases. We want to dispel the myth that people in a uniform are all bad, or even adults for that matter. This is absolutely the key to changing criminal thinking and developing pro-social behaviors that leave a positive and lasting impact long after they are released.”
Through continually adopting forward-thinking and data-driven approaches to juvenile detention, Dominick explained, the Center has been recognized as a finalist for its recent award each year since 2015, including its first winning in 2016. He points to his agency’s work culture and pro-employee mindset as the primary reason for the Center’s success and national notoriety in the juvenile justice and detention industry. “We would not be able to achieve the good work being done here, the successes, the recognition, or the awards, without dedicated staff or a work-culture that supports them”, he shared.

PbS, a data-driven improvement model identifies, was originally launched in the mid-90s by the Office of Juvenile Justice and Delinquency Prevention and other key government agencies. Today, PbS has evolved into a full-scale quality improvement program, focused on monitoring and improving all aspects of detainment for juveniles, ensuring their experiences are based on practices proven to offer youth meaningful second chances and reducing their likelihood at continued delinquency. More information on the Florida Parishes Juvenile Detention Center can be found at www.fpjdc.org and Performance-based Standards at www.pbstandards.org .

The Florida Parishes Juvenile Detention Center maintains a Wellness Policy to promote health and wellness for its residents. The policy supports initiatives for nutrition education, physical activities, and staff development. Learn more about our Wellness Policy by clicking here.